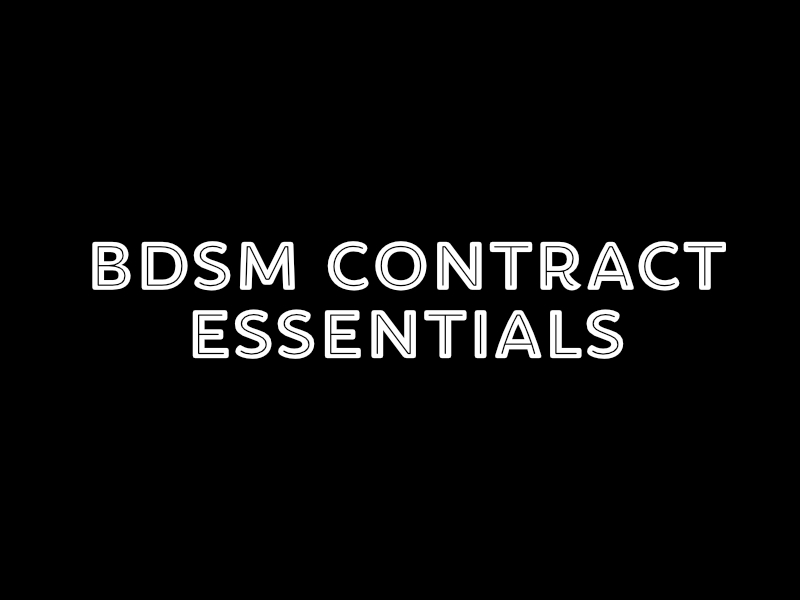 It’s also important to include an expiration for the contract. If you’re just starting out, start with a smaller time frame, such as a week or a month, to ease yourself into the new dynamic. You can always renew the contract once the week/month is over. If you’re more experienced, you may opt for a longer duration such as six months, a year or even a lifetime.

EXIT CLAUSE
Include how to dissolve the contract if one or more parties would like to cancel it. Getting clear about how to exit the contract at the beginning will help make things smoother if things need to shift later on. It’s also a good idea to include how the contract may be renegotiated down the line or if the current contract needs to be canceled and a new one written. Since a BDSM contract is not legally binding, anyone can leave the contract at any time without legal ramifications but in order to ensure harmony in the relationship, include an exit clause.

RULES, RIGHTS AND DUTIES
Write out each participants’ rules, rights and duties in clear, concise language. The participants may want to write this out for themselves, for the others or work on it together. This is the nuts and bolts of the contract, where you decide what rules you want to establish for each participant, what types of rights each person has and what are their duties.

ALLOWABLE PUNISHMENTS
Include a list of allowable punishments along with their severity and limits. Rank the punishments from minor indiscretions to major issues to help ensure that the punishment fits the crime.

SAFE WORDS
Be clear about what your safe words and gestures are and what they represent. Include gestures for times when the participants can’t speak (i.e. when gagged). For example, the word yellow will be used when you want to pause the action and require a check in to see what modifications can be made.

The common safe words are GREEN to indicate that everything’s fine and to keep going, YELLOW to slow down or pause the action (be clear in your contract what it exactly means to you), and RED to stop the action completely.

RULES AND PROTOCOLS
Even though you may have included rules earlier in the contract, you may want to include additional rules and protocols in a separate section. Some people get very precise on how they want each participant to act within the dynamic and have established clear protocols for them to follow, such as waiting at a precise time fully nude with the Top’s favorite drink.

GOALS
Some participants like to include goals for the length of the contract. This is especially true for the bottom types who like to work on self improvements during the contract and want to be punished accordingly if they don’t follow through. This is a wonderful way to establish accountability towards important goals, such as cutting out junk food or sleeping eight hours a night.

SHARING/OTHERS
If your dynamic will include participants outside the contract, you will want to outline that in its own section. Be clear about what’s acceptable and what’s not acceptable along with any rules you want to have when interacting with others. For example, even if you’re in a monogamous relationship, if you were at a kink party, would it be OK for others to touch you and, if so, in what ways? Get clear about your limits to sharing and interacting with others.

COMMANDS
Some Tops want their bottoms to respond to certain commands. Include a commands section outlining each command and how the bottom is expected to react to it.

The slave relinquishes all of its rights and privileges, agreeing to submit to the Master in all ways. By signing this contract, the slave agrees that their body belongs to the Master and can be used in any way they see fit as long as it falls within the confines of this contract.

Either party may void this contract at any time by providing the other in writing with their intention to do so. The contract will then be considered void and will no longer be upheld by either party.

The slave promises to obey the Master at all times, to submit itself to him fully and be readily available, sexually and otherwise, whenever needed.

The Master promises to guide and protect the slave at all times, keeping its best interests at heart while making decisions.

The Master will punish the slave when it’s deemed necessary, within the bounds of correction, prevention and maintenance. He will not misuse his authority in any way. The agreed upon punishments include spanking (bare handed), time outs and anything else he deems necessary as long as they don’t cause permanent damage or include anything illegal.

The following limits will be honored during the length of this contract:

The following safe words will be used:

The Master reserves the right to share the slave with others as he desires. He promises to keep the slave safe at all times during these interactions. The slave, however, cannot have sexual contact with anyone outside of this contract without the Master’s written approval.

Your cart is currently empty!

Become part of the coolest tribe ever. Join now to save 25% off everything on my website and in my Etsy shop. You'll also have insider scoop of the latest products, access to unadvertised flash sales, free printables and exclusive giveaways. Opt out at any time. xo

Your cart is currently empty!